How to scale a sales team at a startup: designing processes

When expanding your startup's sales team, you can't rely on established processes. Here's what we did at VivaReal to scale sales and still improve results 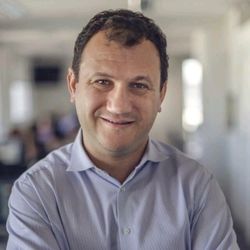 With a strong international real estate background, today Ricardo is currently responsible for the OLX Group real estate business unit in Portugal (Imovirtual). His previous startup experiences include Achieve More, VivaReal, CargoX, and Neoway. Before that, he worked at AB InBev and on projects for companies like J&J, Pepsico, Nextel, Yduqs, and Grupo Globo.

When reading a book, each one of us gets a lesson out of it. That's because we've faced different challenges and become different people from them. Even at the moment of reading, we are still fighting our own battles.

There was one passage that caught my eye when I first read Ben Horowitz's classic The Hard Thing About Hard Things. Ben shared his own difficulties and learnings while hiring Mark Cranney, a person who did not have the characteristics required for an aggressive sales executive, according to him. To begin with, “Mark had an average height, and sales executives, for the most part, used to be taller. In addition, his square body looked uncomfortable in a suit that had certainly been tailored.”

Many still associate sales with this extroverted and expansive profile, that seems to be "born with the gift for this art." And these characteristics can really make a lot of sense in the initial stages of unveiling a company and its product or service.

But these are not the right skills you should look for when scaling your startup's sales team. We will discuss these here.

At the beginning of my career at AB InBev, I took part in an internal process for a sales manager role. I was not approved.

During the interview process, I remember being asked about leaders that I admired. I had difficulty remembering to answer names like Martin Luther King, Felipão (we were in 2004), Steve Jobs, or some prominent director of the company or in the business world. I wasn't even able to explain what would define a good leader.

I was very frustrated at the moment. But analyzing the situation later, it is easy to see what happened: other candidates were more prepared than I was at that moment for that challenge. AB InBev was a mature business with very structured processes. The person who takes on the challenge of being its sales manager doesn't aim to design new processes. It aims to execute with excellence pre-defined processes.

The situation was different when I worked at VivaReal, CargoX, and Neoway. They were early-stage startups at that time – I was part of VivaReal's commercial expansion right after it received a Series A, part of CargoX's sales team when it was still in the single digits, and part of Neoway when they were still structuring their sales team.

These are very different products and markets, but the lessons you need to learn for scaling a sales team in a high-growth startup are very similar.

The sooner you understand and apply the lessons that make sense for your startup, the better sales results you'll have. So write down your first lesson for scaling your startup's sales team the right way, after you already reached product market fit

It's about your team, not about superstars

When you're expanding your sales team, it makes a bigger impact  if you increase the result of each team member a little rather than multiplying the result of a few people. You need to design new processes so that the whole team benefits – exactly the situation that was never going to fly back in AB InBev.

Imagine two situations: you have a team with 3 salespeople and a team with 30 salespeople. There's one constant: only 1 salesperson is the sales star and manages to improve his own result by 45%, while the rest of the team doesn't improve.

To again achieve 15%, that same salesperson would have to improve his/her result by 550%. But there's only so much one person can make individually. The best way to exceed the total result by 15% is if every salesperson exceeds their own result by 15%.

A real example at VivaReal

At VivaReal, we followed this process improvement dynamic by learning what to do with the best salesperson we had on the team and creating best practices to reproduce their ideas for the rest of the team, explaining how it should be done.

For example: at one point we realized that the best salespeople made fewer face-to-face visits than the others and were managing to make sales over the phone, increasing their productivity and sales.

First, we understood what the market's objections were for that and the arguments they used to convince customers, and we also mapped how they organized their workflow and where the leads were coming from.

It was 2013. Following closely, we saw that it was clear that this movement of inside sales for the real estate market was already possible and the best in the team were proving that. The business of advertising online properties was becoming more common and our brand was already better known in the market.

Let's remember: to improve the result of the whole team, we had to make each salesperson improve his own result a little. We delivered this guideline from the best salespeople to the entire team.

It was not a telemarketing script in a cast, but directions to be followed: a book with the most common objections and which arguments to use in each one, as well as a new commercial presentation. We also defined a lead generation process with marketing, first serving the leads through a separate area with account management reports in a CRM, so that we could manage the entire funnel.

With that, everyone started doing a little bit more. We gradually raised goals and adjusted the variable remuneration accordingly to reflect this new reality, keeping increasing overall sales.

This new process design and review cycle was repeated again and again, as every time a different salesperson stood out with new learnings that could be replicated. With their new initiatives, we could always learn some interesting ideas and improve the team results.

I believe that not coincidentally I assumed the position at the Manaus Direct Distribution Center. It was just incorporating a resale operation and undergoing a service restructuring between three brands (Antarctica, Brahma, and Skol). They were at the beginning. It was important to know the inner workings of old sales processes, but also have the capacity to create new ones.

It was the beginning of my journey into innovation in sales – and this would be essential learning for the startup world later on.

7 steps for conquering your startup's first investment round

Gunderson Dettmer's Dan Green explains what is vesting, what is a vesting schedule, how do they work, and the best practices for founders and employees
Read

The pressure is always on when fundraising. Learn how to deal with it

Are you getting the first or next investment in your startup, and feeling the fear of failure? Here's how to deal with the pressure when fundraising
Read